They really are a static point in time that we pin some value on.  Birthdays are the same thing.  There is no intrinsic value to have them just a way to mark time off a calendar or track progress or what I like to do, reflect on the past, present, and maybe what the future may hold. 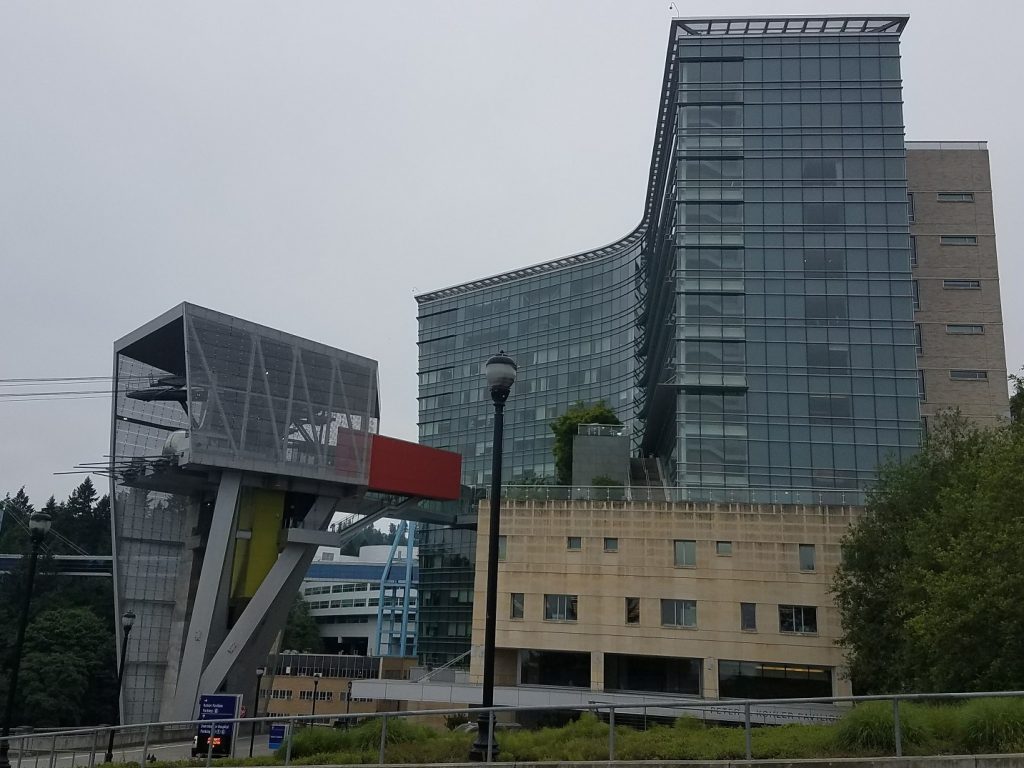 One year ago today, the day after Memorial Day, which happened to be May 31st – so there is an argument is an anniversary the day of the week something happened or the actual date something happened… ponder that for a moment – (and I have always wanted to say this), but I digress.  My anniversary could be considered today or tomorrow so I am going to pick both.  So, one year ago today I pulled up to this cluster of buildings on a hill in the wee hours of dawn to pop in for a little nip and tuck of my brain.  Even a year later I can remember the entire morning, the conversations (not verbatim but pretty good), the veteran pre-op nurse that gave me confidence, the transfer that put my IV in he worried me asking a bunch of questions and did not know how they normally do things (BTW that IV was uncomfortable during my entire stay), the THREE respiratory therapists I would have (that is what happens at a training hospital) and the surgical nurse with the dirty shoes.  I mean seriously dude, you are going to be in surgery with my BRAIN exposed, yah I know your feet won’t be anywhere near my brain BUT get some clean or newish shoes, I am sure you are well compensated.  They looked like he used them to walk through forest park to get there or uses them to mow the lawn.

While they ALL told me I would not remember any of this I sure did.  I chatted with the guys about Cycle-cross as they wheeled me to surgery.  The team in the room said to bring me in feet first as they wheeled me in head first so we had to back out and turn around.  I wiggled off the gurney to a freezing cold stainless steel table with this red ball to rest my head on.  The “don’t put him under, the table is not working” comment.  Me saying, “did you reboot it” – them saying “great the patient is telling us how to fix the table.”  My next comment, “is it plugged in?” as they are discussing how to replace the table with a new one, moving me to another room, where is the maintenance guy, followed by oh, it was not plugged in we are good, its working, you can knock him out now.

I wake up in recovery and feel pretty good.  I am very thirsty and hungry and my fear of being attached to a breathing tube is relieved.  Honestly that was my biggest worry waking up with a breathing tube jammed down my throat to have them pull it out while I was awake.  They asked if I wanted to call Jessie so I did.  The rest of the day was waiting to get a room, a post op MRI, a pig out on dinner, realizing my innards did not work yet, that dinner coming right back up and spending the rest of the night flowing in and out of  conscious.  Dilaudid gave me some wild dreams that still wig me out a bit.  Personally I did not like being on that stuff.

The rest of the week continued and I never ceased to amaze everyone with how well I was doing.  So now a year later and I still get that amazement but I cannot help but worry when is that amazement going to end.  I try to feel, act, be, as normal as everyone else but that is just not the case anymore.  There is always a reminder of this giant change in direction, no matter how I ignore it, won’t go away.  As I pull into the garage I hear on OPB about the writer Brian Doyle from Lake Oswego has just passed away. He was only 60 years old.  April Baer was reflecting on some interviews with him, some of his accomplishments, they even played a little reading he did back in 2010.  The book he was most known for was Mink River and that is when I realize who he was.  I remember that book from the Lake Oswego Reads program.  it was the summer selection from 2012 and I always wanted to read that book.  (Actually I think I have it and I think I started it on a trip somewhere – will have to look through the bookshelves)  I was sitting in the car listening to the story about him, just as it ended the OPB lady asked April about how he died.  He was diagnosed with Brain Cancer back in November and died yesterday.

So my one year anniversary gives me a lot to reflect upon.  I am very thankful for all my friends and family that have helped me through this.  The management at Con-way that supported my recovery so I did not have to live in fear of job issues.  The amazing recovery staff at OHSU and all the people that helped support us and our Team Food Baby fundraising for the tumor walk. To my sister Dianna taking great care of me during recovery and working around our house.  She was just as busy as a bee the whole time.  To Jessie for being my remember all and doing the worrying for me.  Plus, she had to haul me around as I still recovered from the vertigo that led to the tumor discovery in the first place.

I have made new friends along the way, Dr Jerry Jaboin who provides the encouragement I need and often reminds me, I am not a normal Brain Tumor patient. Jessica Morris, another Brain Tumor Survivor that is 5 months or so ahead of me.  She is showing me how to stay strong throughout this.  You can check out her blog here-> https://jessicamorrisnyc.wordpress.com/ I find it interesting how the experience she had, while similar to mine, was quite different.  She had music during her radiation treatments but we both visualized those little tumor cells getting zapped.

you get the point

So on my first anniversary of an amazingly successful surgery I cannot wait to write about my second anniversary and how thankful I am!