Wow! I just spent the last 10-25 min with Tom before his post-op CT. He is doing so well! He can talk and says he remembers pre-op this morning. Seems a little tired (I can’t imagine why). I am just astounded as I really didn’t expect him to be this well so fast. What a rockstar!

Early on we were told they did not think they would get the whole tumor, the doc just told me they think they got it all. They will still do pathology and we won’t know next course of treatment for 5-7 days. Brain function stayed notmal through the procedure. I am so glad we chose OHSU. 1-2 hours and I can see him.

It’s out! The said it went well, closing and one of the docs is coming to talk to me. More later.

They just took him back. Everyone kept commenting on how healthy he is and really seemed to be up on his case. Feeling good. They are supposed to call me from the operating room with updates throughout.

Thanks everyone for being so supportive.  The last couple of weeks have been interesting.  I have wanted to post things every day but then just did not get around to it.  In the big picture it does not really matter.  Bali was great, so glad we got to go.  Pre-surgical check out went well.  They feel I should have no problems with the surgery.  Up EARLY tomorrow, I am the first one in as we have to be there at 5:30am for 7am surgery.  Should take 3-4 hours so I should be out and ready for lunch when I wake up!!!  I heard hospital food is great!

24 hours in ICU then off to a regular room for 2 days.  If all goes well they should kick me out Friday to convalesce back at home.  Jessie has cleaned the house top to bottom so I can recuperate in a germ free environment.

This whole thing is easy for me, I just have to lay there and let them do their thing.  Jessie is the one that can use the help and encouragement.  She worries.

Thanks again for all the positive thoughts, wishes, support etc etc.  I am lucky to have such great friends and family.

Okay, we are all set to check in for surgery at 5:30 am. Time to get ready for bed! Thanks for all your good wishes! Check back here for updates and I’ll do my best to keep things current.

Here is a map of where I will be the next few days.  Maybe text Jessie to find out what room I am in…. 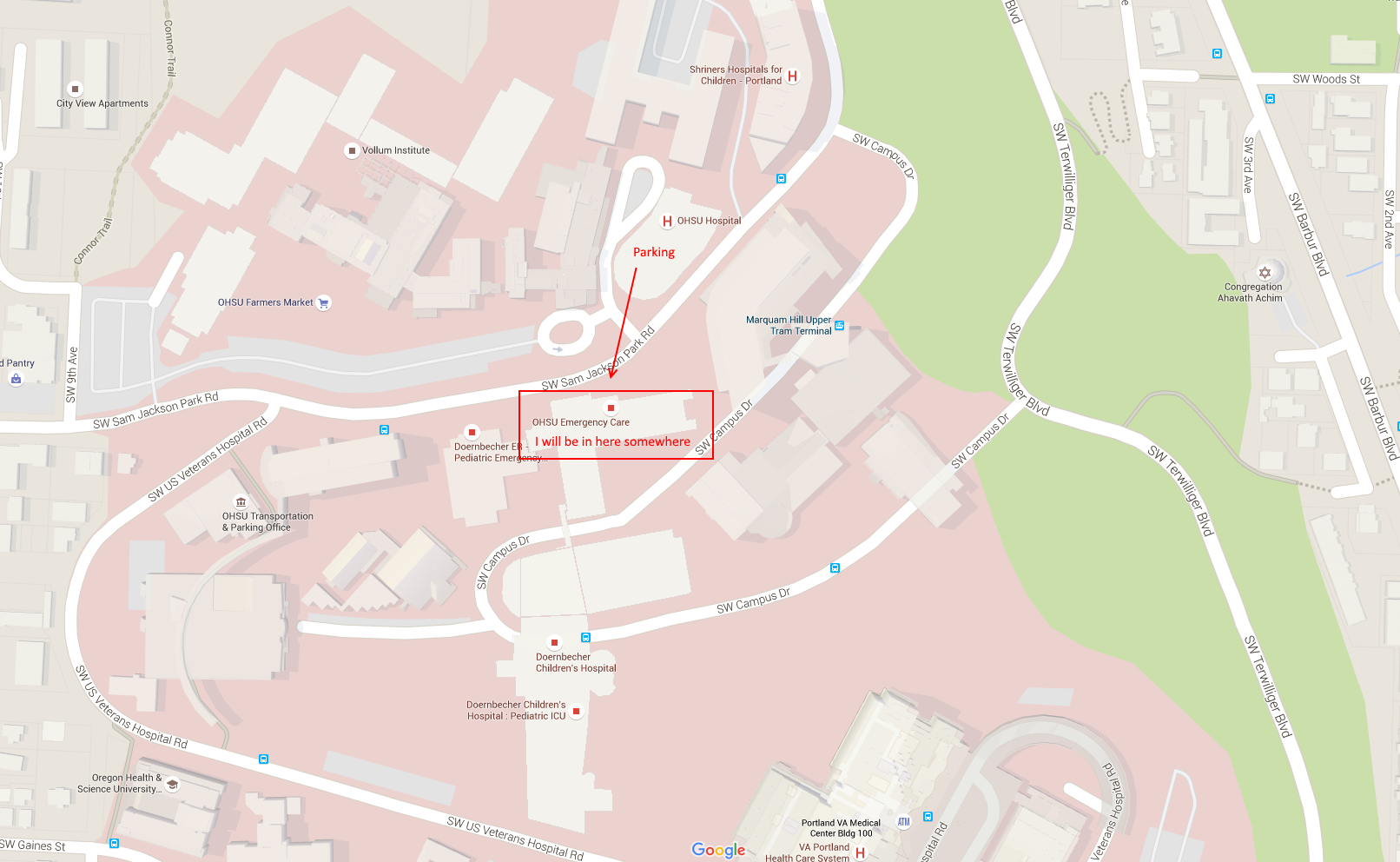 It was nice to get away for a short time and not think about what is going to happen over the next couple of months. Bali is a wonderful place filled with some of the most kind and friendly people I have ever met. Getting around is a challenge as they have a crazy traffic and roads. We would both go back in a heartbeat. Too bad it is 20+ hours to get there.

Yesterday I had my pre-surgical MRI and checkup to make sure I am heathy to operate on. Apparently I have less than 1% chance of complications from the anesthesia.  So I have that going for me. 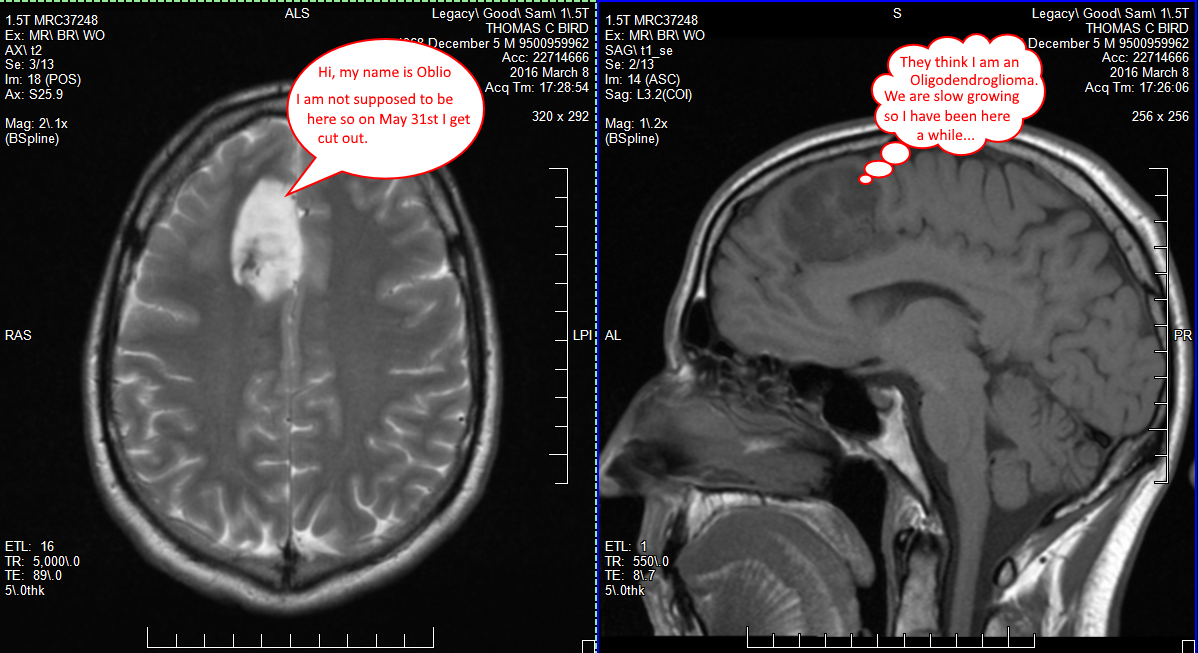 As many of you may know I had an issue with vertigo.  That was on March 8th and here two months later I am still dealing with it.  While I cannot do the things I used to it was a blessing in disguise as my emergency room visit resulted in an MRI.  When two doctors and the nurse come walking into your emergency room with grave looks on their face it is never good news.  They found a mass in my brain.  After meeting with several doctors and finally getting a referral to OHSU we have a plan of action.  My doctor (Dr Dogan) said, you are 47, that is not supposed to be there, it will keep growing, we need to cut it out.  So May 31st I will head up to OHSU for surgery to cut out my tumor.

Sorry so many of you have to hear this via email but unfortunately I cannot call everyone.  So our plan of action is pop in on the 31st, 3-4 hours later have it removed, a night in ICU, probably two more days in the hospital, then home to convalesce.  Pathology will follow in 5 to 7 days. Dr Dogan said it is in a great spot, the front right lobe and that area is not really vital.  It does not affect any motor skills or speech.  Front right is more short term memory and some personality stuff.  Good news if there is such a thing is that area is no longer functioning tissue so I should stay about the same – I hope.  You never know when they cut into your brain.  I just hope he does not have to sneeze while working in there!

OHSU is very well regarded and they approach this as a team.  All the surgeons get together on Friday to review all the cases for the upcoming week.  Plus, there is a team of oncologists that check out the tumor once resected to identify and develop a treatment plan.  I feel very lucky to have a great hospital in the area.

What was I talking about again… I seem to have forgotten…  Sorry short term memory humor.

Since we have family and friends all over we thought it would be best to setup a Facebook group and a blog to keep people updated.  The Facebook group is private so Jessie and I will be sending out invites over the next couple of days.  If you want to add someone to the group go ahead but we have to approve them. I am also (along with Jessie) going to start a blog – if I get this setup right the blog should update the Facebook group.  Feel free to forward this email to those I may have missed and I cannot remember everyone’s email.  That memory thing again.

In doing research on my brain issue I came across two other blogs that have really helped me out.  I have included them below in case you are interested.  I really like the one titled 20 things to expect after brain surgery.  I cannot say I really look forward to this list but it is a nice resource from someone that went through it.

Now below this line is details that you may want to skip – the two blogs above will both say – DO NOT LOOK UP THINGS ON THE INTERNET.  I both agree and disagree.  I want to know as much as possible so with that said this can sound worse than it is as every case is different, every study is old, not everything is an apple to apple comparison.

They think it is an Oligodendroglioma – that is a tumor from the supportive tissue of the brain.  There are 4 types of gliomas and mine they think is a type 2 thus the Oligo.  They tend to be in adult males in the 30’s to 50’s and are often in the frontal lobe.  They are very slow growing and thus can take a while to find.  Mine is filled with calcium deposits so they think it has been there a very long time.  I would guess 7-10 years given the research I found.  When asking my Dr how many of these things he does in a year he could not really say as he normally works on more difficult cases.  The Brain Institute does 300-400 tumor surgeries a year and my doc does a couple hundred.  He feels I should be back at work in 6 weeks and on my bike in 3 months.

Fingers crossed he is right.

Pictures for those visual people…

A long time ago in a city far away when really all I did was mountain bike ride I was told about this thing called Cyclocross.  You race on a course and do as many laps as you can in the time allotted.  I had dabbled in mountain bike racing and found it exhausting and not really all that much fun.  I moved away and quickly forgot about this Cyclocross thing.

Many years later I moved to Oregon and this thing called Cyclocross popped up again.  I had gotten into road riding a bit more and thought riding a road bike in mud and muck during the off season might be sort of fun.  Each year just before Cycle Oregon I would say, I am going to race Cross this year.  Then promptly get sick after Cycle Oregon and then forget about Cross seeing how it started raining and was cold and dark and who wanted to ride a bike in the cold and dark and rain after being sick.  Not I.

Then in 2009 I finished Cycle Oregon and found to my surprise I was not sick.  Now for three years I had been saying, I am going to race Cross this year only to back out because I was “sick” or some lame excuse.  This year I had no excuse so what was I going to do.  Like all of us bit with the cycling bug it was simple – I needed a new bike!  Off I went to ebay and bought the first cross bike I could find that was less than $500 and would fit me.

I ended up with a Surly CrossCheck that was a Frankenstein bike if there ever was one.  A girl from Rutgers had used it to race on her college team (Sorta makes me wonder if she is still racing now).  I got the bike on a Monday, took it to Bike Gallery on Tuesday, asked if they could put it together and look it over for any problems.  They said sure it will be ready by Friday.  Well that was no good as I wanted to race on Wednesday at Blind Date at the Dairy they of course said “we will see what we can do”.  Wednesday afternoon I get a call your bike is ready so I zip off to Bike Gallery to pick it up, head home and put my pedals on, and ride up the street for a test ride.  Now I have short legs – freakishly short legs – and I could not get the seat down low enough so out came the hack saw.  I cut about 3 inches of the carbon seat tube – dropped in the post and off I headed to the race venue.  In less than two hours I had ridden the bike up and down the street, registered for my first race, did a lap around the parking lot, staged, and was off on my first ever Cyclocross race.  It was a blast!!!

So where did Team Food Baby come from?

That first year when I saw the results many racers had a “Team” and I thought I should have a team.  After a race weekend my girlfriend and I sat around trying to come up with team names.  There were many creative ones out there:

We had recently watched the movie Juno and she mentions being pregnant, her friend asks, are you sure it isn’t a food baby.  That totally cracked me up.  Being only half serious about this racing thing and being sufficiently endowed in the belly area Team Food Baby was born.

I did not know there were actual real teams and rules about creating a team so I just filled out the forms with my Team Food Baby name.  Now it is saved in the OBRA results database with my name. I though I might as well register the domain name and so here we are years later on TeamFoodBaby.com where the motto is: